Explore this hypnotizing land covered with ancient temples, pyramids, statues, ancient tombs, unique monuments and sand dunes with a hire car and experience your next self-drive holiday at your own pace, control and most importantly, freedom. This is a holiday which you would struggle to put into words.

Egypt is located near north-eastern Africa and is surrounded by the Mediterranean and the Red Sea. Begin your car hire and explore the true wonders and mysteries of Egypt in Cairo, Egypt’s capital city.

Although Egypt is commonly known for its history and fascinating monuments, there are many more activities to take part in such as; scuba diving, shopping, tasting ethnic cuisines, fishing, visiting the famous Nile River or cruising through the waters of the Mediterranean Sea. View more car hire tips and information that would be useful to know when driving in Egypt.

An hours drive away from Cairo International Airport is one of the most popular attractions in the world to be seen by travellers which is the mystical, Great Pyramid of Giza. Created during the period that Egypt was once one of the world’s richest and powerful civilizations. Egypt had officially made history by creating man-made sites and monuments that are now an attraction appreciated by many visitors around the world. The pyramid is estimated to have 2,300,000 stone blocks and some of them even weigh up to 60 tons! So ensure to make it a stop in your itinerary and grab a photo with the words well-known attraction and appreciate the hard work that took place many years ago.

Drive 7 hours south from The Great Pyramid of Giza and head into Luxor, which is known to be home to many world-known sites such Temple of Karnak, Valley of the Kings, the Luxor Temple, museums and much more. Be amazed at the history that lies below this city, most tourists describe the destination being a 'vast open-air museum'. Luxor is filled with captivating stone carved statues of the sun gods that were once worshipped many years ago. Lose yourself in the ancient history of each attraction, that is resurrected by Egyptians when they retell the intriguing tails.

DriveAway are your self-drive specialists. Choose from one of our car hire locations in Egypt below. If you can't see your desired location search our booking engine above for many more locations. 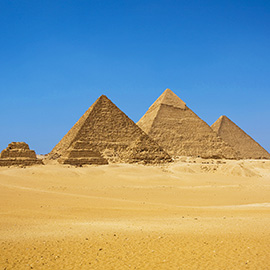