While many of the highways and motorways in Europe are among the best in the world in terms of quality and traffic flow, however this comes with a cost. You will find that a lot of European countries have fees to cover the use of certain roads. The system by which fees are paid varies between countries, so DriveAway has put together a guide which may help your holiday planning. 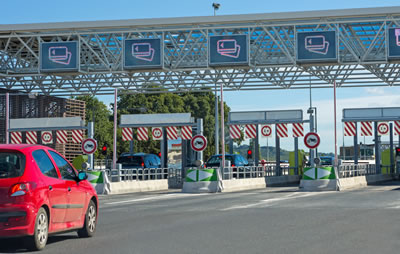 A form of toll paying many of us would be familiar with is toll booths, where payment is made along the section of road being charged for. The price charged depends of course on which country you are in, which road you are using, the size of your vehicle, and in some cases, the distance travelled.

Countries which feature toll booths on some of their roads include: Croatia, France, Ireland, Italy, Norway, Portugal, Spain and the United Kingdom.

In some European countries, fees for the use of highways and motorways are governed by a system of stickers, also known as Vignette, which are displayed on the windscreen. Stickers are usually available for time periods of seven days, one month or one year, although this can vary between countries. These may be inspected along the way by police and heavy fines can apply to those without stickers. In some cases of foreigners caught without appropriate stickers, cars can even be impounded to ensure the fine is paid, so it’s important to be covered!

Other Tolls in Europe

In order to reduce traffic, some European countries have introduced a fee system for those who drive in busy places or during peak times including: