An Introduction to Austria: Vienna, Salzburg, and Innsbruck

Discover the best of Austria on this seven-day tour. Geared towards first-time visitors, this itinerary showcases the most iconic cities as well as a vivid sense of the local lifestyle. 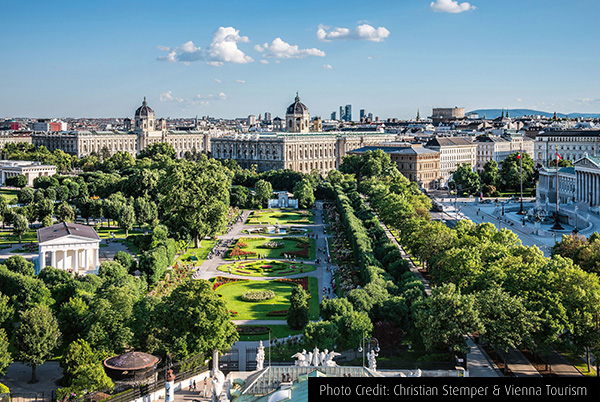 Start your road trip in Austria’s capital Vienna. The city is famous for its glorious past as the seat of the Habsburg Empire, reflected in the cities grand architecture and century-old traditions. However, visitors to Vienna will also find a diverse, cosmopolitan and thoroughly modern city. It’s the blend of old and new, tradition and innovation, that defines Vienna’s identity.

A tour of the Old Town delivers a wonderful introduction to Vienna. Whether you choose a guided tour or want to explore on your own, we recommend going on foot so you'll have ample time to take in the city's grand architecture. From the great gothic details of the newly renovated St. Stephen's Cathedral to the Imperial Palace and the intimate little alleys in between, there's much to see and do. Leave room for a Wiener Melange or a typical Viennese lunch at any of the beloved coffeehouses there – Hawelka, for instance. We also suggest a stop at the Imperial Palace, the former seat of the Habsburg Emperors, for a glimpse of the Imperial Apartments, and the Sissi Museum for an introduction to the dynasty that ruled Austria for almost 600 years.

At the end of the day, reward yourself with a delicious dinner at the famed Schwarzes Kameel. The restaurant serves excellent traditional dishes in an elegant setting. Be sure to make a reservation in advance; most popular Viennese restaurants require one. For a nightcap, head to the Loos Bar. As the name suggests, its interior was designed by the great modernist architect Adolf Loos and remains a society hot spot to this day. 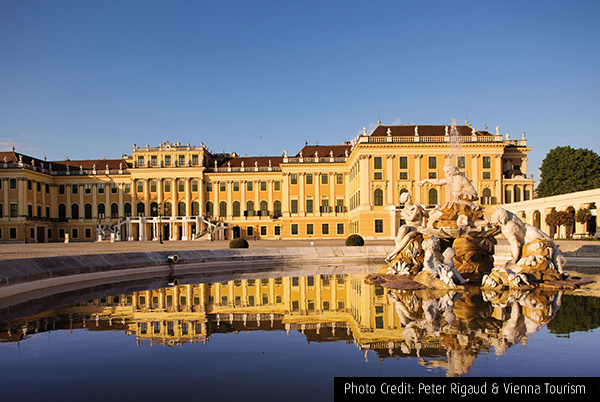 Enjoy a leisurely breakfast at one of Vienna's sprawling farmer's markets. Located in the heart of Vienna and surrounded by art nouveau buildings designed by Otto Wagner, the Naschmarkt is an unforgettable experience. The surrounding architecture tells the story of the epic struggle that shook the city at the turn of the century, as modern thinkers and artists attempted to shatter cultural norms. At the market itself, you'll find local specialities, plus spices and delicacies from all over the world. No shortage of culinary souvenirs here, either: Stop at Gegenbauer's for unique and surprisingly delicious vinegar and oil varieties, or try Szigeti's for a bottle or two of Sekt, Austria's beloved sparkling wine.

Next, stop at the Secession building to see the famous Beethoven Frieze, by Gustav Klimt. From there, head to the Museums Quartier for an afternoon of art and architecture. At the MQ, former imperial stables now house one of the largest museum complexes in Europe. You could spend days here, exploring the small galleries, exhibitions spaces, and installations tucked into the baroque buildings -- but for a single afternoon, we suggest the modern Leopold Museum, home of the largest Schiele collection in the world. Next, head across the street to the Kunsthistorisches Museum and the vast art collection the Habsburgs amassed over the centuries. Again, you could lose yourself here -- but if you only have time for one collection, head to the Kunstkammer for unique art treasures, such as Benvenuto Cellini's precious salt cellar, the Saliera, dating back to the 16th century.

For a particularly memorable final evening in Vienna, enjoy a gourmet meal at the elegant restaurant Anna Sacher, followed by a performance at the iconic Vienna State Opera, Still hungry after the performance? Walk to the Bitzinger sausage stand behind the opera house for a delicious Käsekrainer. It's the Viennese thing to do after any late-night cultural adventure. 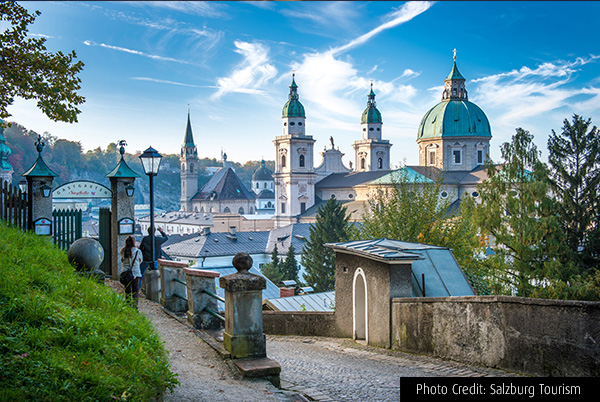 Spend the morning at Schönbrunn Palace, the summer residence of the Habsburgs. Just a 20-minute subway ride from the city center, it boasts a popular carriage museum (purchase tickets in advance to avoid lines); a vast park that's home to the beautiful Palmenhaus, one of the earliest greenhouses for tropical plants; the world's oldest zoo; and the hilltop Gloriette, which affords lovely views over the palace and the city in the background.

After visiting Schönbrunn, pick up your car and drive towards Salzburg. The fastest route on motorway A1 takes approximately 3 hours. As you leave Vienna's relatively flat surroundings and head westwards the landscape gradually begins to change until the alpine mountain ranges lining Salzburg's historic cityscape begin to appear.

After checking into your hotel in Salzburg, you'll have time for an evening stroll through the compact Old Town before you head to St. Peter Stiftskeller for dinner. The oldest restaurant in the world has been serving food for the better part of a millennium, and the traditional local fare hits the spot. In the mood for a little music? Make reservations in advance for the Mozart Dinner Concerts, which highlight the most beloved arias and duets from the composer's operas. 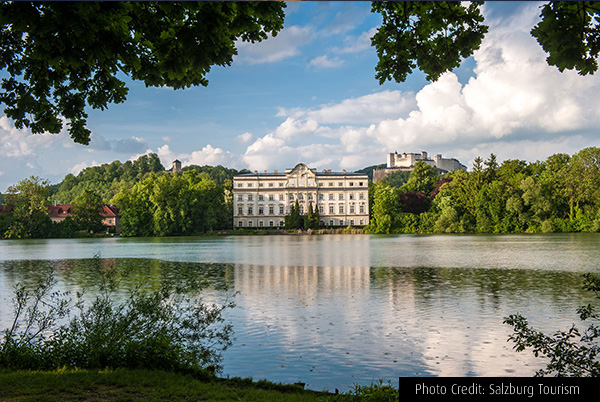 At first glance, Salzburg city is all about Mozart and "The Sound of Music." But you'll soon find there is much more to it than that. From the magnificent Baroque architecture of the Old Town to a wealth of local traditions, outstanding modern art galleries, and international performing art festivals of the highest calibre.

With that in mind, start your tour at Mozart's Birthplace, in the charming Getreidegasse. The museum gives a wonderful overview of the composer's life and his relationship with the city. Next, head to the Domquartier, where a tour of the prince-archbishops' seat of power illustrates the enormous worldly and spiritual influence Salzburg's former rulers once wielded. Spend the afternoon touring Hohensalzburg Castle. Even if you don't have time for the excellent exhibits there, the panoramic views over the surrounding countryside are magnificent in their own right.

In the early evening, take a leisurely stroll to the beautiful Mirabell Gardens across the river before heading to Fideler Affe for a traditional dinner, and samples of Salzburg's much-loved local beer. Enjoy a nightcap on the terrace of the Sacher Bar by the Salzach river, with views over the Old Town and the fortress. 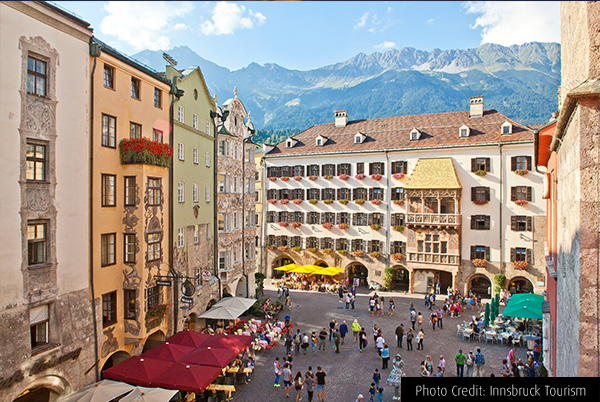 Use the remaining half-day in Salzburg to go a bit further afield. For a bit of exercise, join Fräulein Maria's Bicycle Tour for a "Sound of Music"-themed tour of the city and its outskirts. Alternately, head to Hellbrunn Castle, where a mischievous former archbishop created a water park filled with hidden trick-fountains to surprise his guests. Parks of this kind used to be quite popular in their day; now Hellbrunn is the only one remaining.

In the afternoon, continue your journey to Innsbruck. The fastest route leads over the motorway in Germany, but we recommend taking the more scenic road through the Austrian Alps passing by the beautiful lakeside town of Zell am See. This route takes approximately 3 hours and 40 minutes.

Innsbruck, the capital of Tirol, is nestled in between majestic mountain ranges and has managed to retain its medieval charm throughout the centuries. The former imperial city is a cultural centre and winter sports destination -- so far it has hosted three Olympic Winter Games.

Celebrate your first evening in Innsbruck with a traditional Tyrolean dinner in the heart of the Old Town -- at the Hotel Goldener Adler, for example. 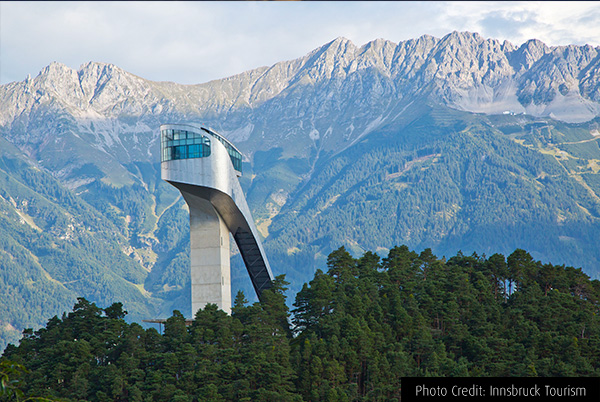 Innsbruck's past -- as a trade hub, mining town, and seat of an imperial court -- long attracted scholars and artists such as Albrecht Dürer. Spend the morning exploring the Old Town and its cultural offerings. The Imperial Palace, the Folk Art Museum, and Imperial Church are located in the heart of Innsbruck and are all within five minutes of each other. Together, these museums provide a thorough overview of the local history, and a memorable look at how people made a living in this rough, mountainous environment.

In the afternoon, visit the Panorama Museum with its 360-degree panoramic painting, depicting one of the most momentous events in the city’s history. Then head to the iconic Bergisel Ski Jump, designed by architect Zaha Hadid. There you'll see firsthand the daring heights from which ski jumpers hurtle themselves down the ramp. Or you can explore the mountains by taking the Hungerburgbahn -- another Zaha Hadid creation -- from the city centre to the top of Nordkette Mountain. Enjoy the views over Innsbruck from the mountaintop restaurant, or take the panoramic tram ride from Innsbruck to one of its Holiday Villages, Igls, for a leisurely stroll through the village.

For a different take on local cuisine, enjoy dinner at the Wilderin, a new restaurant that sources its ingredients exclusively from the region. Toast your last evening in Austria from the rooftop of the Adlers hotel, where you’ll enjoy views over the city and the Alps in the background. 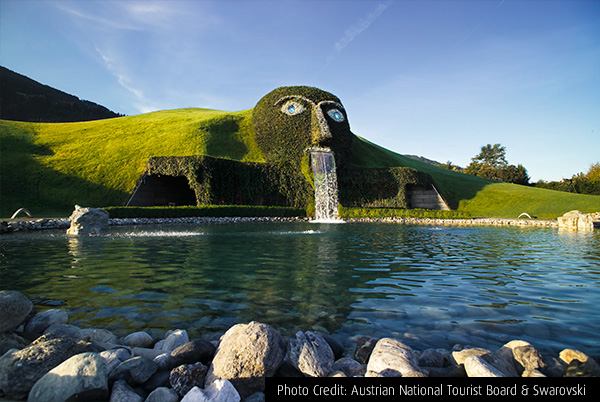 From Innsbruck it’s only a 20 minutes’ drive to the Swarovski Crystal Worlds in Wattens. Enter into a fairy tale world of shimmering crystal, curated by international artists. Allow time for a lunch break at Daniels. Café and Restaurant and take a piece of Swarovski home from the Swarovski flagship store. A truly sparkling finale of your Austria road trip!

This top drive was provided by the Austrian National Tourist Office