Missouri Life On The Mississippi

Arrive in Hannibal, MO. Tour the town with Hannibal Trolley Company Sightseeing Tours. Join them for an old fashioned trolley ride. Step back in time and relive the adventures of Mark Twain’s days in Hannibal. Check into hotel. Dinner at one of Hannibal’s group-friendly restaurants. Overnight Hannibal.

Mark Twain Boyhood Home and Museum Properties - The Stories Started Here… Discover how a young boy growing up in the small village of Hannibal became one of the world's most famous authors. A self-guided tour of the Mark Twain Boyhood Home & Museum Properties gives you the chance to explore the Hannibal of Samuel Clemens' childhood and experience the beloved stories he created through the power of his imagination. Generally will take 90 minutes to 2 hours.

The Mark Twain Cave Complex - Mark Twain wrote, “By and by somebody shouted, “Who’s ready for the cave? Everybody was. Bundles of candles were procured and straight away there was a general scamper up the hill.” An experienced guide will escort you on a one-hour tour featuring points of interest mentioned in Mark Twain’s writings. Walkways are level and smooth and there are no steps. Persons of any age can easily make the tour. Bring a light wrap as the cave is 52 degrees year around. Wear sensible walking shoes and be sure to bring your camera.

‘Unsinkable Molly Brown’ - Visit the home of Hannibal’s famous survivor of the Titanic. Learn more about the lady herself and her Titanic experience. Generally takes 30-45 minutes.

This evening, enjoy dinner on the Mark Twain Mississippi Riverboat. Cruises on this nostalgic Riverboat start from the landing at the foot of Center Street and depart at 6:30 PM. See this famous river town from the boat that bears the name of its most famous citizen…Mark Twain. Enjoy excellent food, live music, dancing, and beverages aboard the heated/air conditioned Mark Twain during this two-hour cruise. Overnight Hannibal.

Depart St. Charles for St. Louis Cathedral Basilica. View the world’s largest collection of mosaic art at the spectacular Cathedral Basilica of St. Louis. Pope Paul VI called the Romanesque/Byzantine style church “the outstanding cathedral of the Americas.” More than 41 million pieces of tesserae in 8,000 colors fill more than 83,000 square feet. The west chapels are the work of Tiffany and Company and the main altar and another chapel features the work of Gorham. Docent led tours ($2) are available daily from 10 a.m. – 4 p.m. Reservations are suggested for tours (314) 373-8240 but guests can walk through anytime between 10am-4pm.

Missouri History Museum - This neoclassical building was built with proceeds from the World's Fair to honor President Thomas Jefferson’s role in the Louisiana Purchase. It was dedicated in 1913. It was built on the site of the main entrance to the 1904 World's Fair and was designed by Isaac S. Taylor, who was also the chief architect of the Fair. In 1913 the Jefferson Memorial Building was the only monument of national stature honoring Thomas Jefferson, preceding the more famous domed structure in Washington, D.C., by 25 years. Exhibits include the 1904 World’s Fair, Lindbergh and Seeking St. Louis to name a few.

Enjoy breakfast at the hotel before departing for the Gateway Arch where we will take a trip to the top of the arch for a magnificent view of St. Louis. Next visit the Museum of Westward Expansion which preserves rare artifacts from the days of Lewis and Clark along with exhibits of early day pioneers who helped shape the history of the American West.

Visit the Old Court House overlooking the Arch grounds. View exhibitions about the Dred Scott case that made history, artifacts and memorabilia in this self-guided tour. See where it all took place.

Enjoy Historic Laclede’s Landing located just north of the Gateway Arch grounds for lunch. This 9 ½ block historic district is a favorite of the locals for lunch, dinner and nightlife. The district takes its name from Pierre Laclede, St. Louis’ French founder.

The City Museum has taken the term “recycling” to dizzying new heights. Housed in the 600,000 square-foot building that was once home to the International Shoe Company, the museum is the brainchild of local artists who created the museum from all sorts of “found stuff.” They didn't have to go far to find materials for the facility, as the curious curators reclaimed a variety of building materials such as old chimneys, salvaged bridges, construction cranes, miles of tile, and even a couple of abandoned airplanes. There are 4,000 square-feet of man-made caves and tunnels, an enchanted forest with sky tunnels, an aquarium, a working shoelace factory, daily circus performances and much more.

Depart St. Louis and travel the Great River Road to the French Colonial Country section. The region along the Mississippi River south of St. Louis is French Colonial Country having been claimed by France after an expedition led by Louis Joliet and Jacques Marquette. The area is the oldest region settled by Europeans west of the Appalachian Mountains with the founding of Cahokia in 1699, the same year as Williamsburg, the colonial capital of Virginia, and predating New Orleans by nearly 20 years. Although English is the common language spoken in the region today, the French heritage is not forgotten. Ste. Genevieve has more than 150 pre-1825 structures and the region has the largest concentration of French Colonial architecture in the North America. Fort de Chartres, a rebuilt 18th century French Fort, is the Mississippi Valley’s premier site for French Colonial re-enactments.

In Ste. Genevieve, Missouri’s oldest town, a charming, laid-back town, where bicycles stand on the sidewalks without locks and people stroll in and out of inviting little shops filled with antiques, crafts, gifts, sweets and wine. Visit the Great River Road Interpretive Center before enjoying lunch at one of Ste. Genevieve’s unique restaurants including the Old Brick House, the Anvil Restaurant & Saloon, The Hotel Ste. Genevieve Café Or Restaurant St Gemme Beauvais.

Tours of historic sites such as the Felix Valle Historic Site can be arranged. The Jacob Philipson House (historic name) is a one and one-half story, side gabled, limestone dwelling with a merchant store and family quarters. This facility gave Philipson an opportunity to establish a business in the town trading manufactured goods for the fur pelts and lead ore obtained in the Missouri territory. Philipson sold the house in 1824 to the son of Francois Valle, Jean Baptiste Valle. Felix Valle, the fourth son of Jean Baptiste became the owner in 1835. The house, located at the corner of Merchant and Second Street is open to the public all year and is operated by the Missouri Department of Natural Resources.

Depart Ste. Genevieve and continue your Great River Road journey to Cape Girardeau. Cape Girardeau, “Where the River Turns a Thousand Tales” is one of Missouri's earliest settled areas. The Mississippi River has played a significant part in the city’s history especially the early commerce of the steamboats. Riverboats can still be seen docked along the riverfront. Historic Downtown, nestled alongside the Mississippi River, which is a designated Missouri Main Street program city. The downtown highlights include eclectic shops, restaurants, pubs, art galleries and seven outdoor murals, ranging from the expansive "Missouri Wall of Fame" to the colourful "Heritage of Music". In the downtown area, you will also find several National Historic Register Sites, including the completely restored Glenn House and St. Vincent de Paul Catholic Church built in 1853.

Check out exhibits such as the Police Memorabilia, Steamboat Photographs, Women's Suffrage, The Nuns of St. Francis Hospital, and Celebrating Cape Women - Society, Fashion and Education. Included in the exhibits is an autographed letter from Amelia Earhart addressed to the Cape Girardeau Business and Professional Women’s Organization along with scrapbooks from the organisation dating back to the early 1900’s. Other exhibits include the 1936 Sharecropper’s Demonstration, the Missouri State Flag, and 1950’s vintage fire trucks, photos and equipment and gear. Browse through the Museum store and find unique gift items made in Missouri artisans including wooden toys, jewellery, art prints, books written by local authors and more. 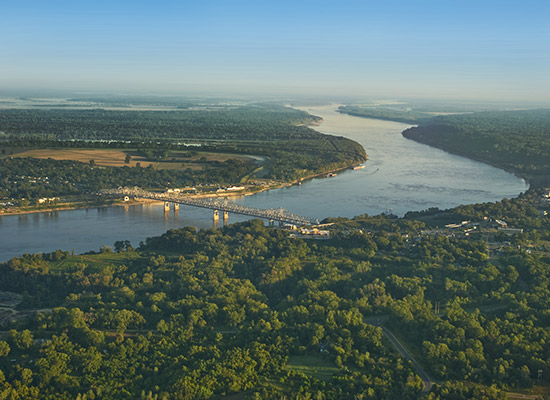 If you would like to book car hire or motorhome rental in USA, simply use our online booking engine above or contact our friendly reservations staff.